A small city on the Adriatic coast, massive medieval walls surround Dubrovnik’s historic centre, looking as if it’s straight out of a dream. It is like a fantasy, making it no surprise that the hit series “Game of Thrones” used it as a film setting. Step inside the incredibly well-preserved walls to stroll the marble streets and narrow alleyways, discovering centuries-old landmarks, from Onofrio’s fountains which supplied the city with spring water for nearly 500 years to the grand Renaissance-Gothic Rector’s Palace and Europe’s oldest still active pharmacy.

After exploring the interior, walk atop the city walls that stretch for 1.2 miles. By starting at Pile Gate your first view is of St. Lawrence fortress, AKA Dubrovnik’s Gibraltar, the sea, and the city. Don’t rush, you’ll want to take advantage of the many photo-ops before basking in the warm water that spills onto enticing beaches below.

Talk to the Experts

Get in touch with our travel experts today.

Where to Stay in Dubrovnik

If you want to stay in the heart of it all, Dubrovnik’s Old City is the place to be with many boutique hotels and guesthouses to choose from, while historical attractions are right at your door. If you prefer to avoid the big crowds that are drawn here, consider Pile at its western approach with a variety of accommodation that will be a bit less pricey, or Ploce on the opposite side known for its luxurious hotels and magnificent views. Gruz is home to the port and several budget to mid-range hotels while Babin Kuk offers more secluded tranquillity and upscale sea-view accommodation.

Things to do in Dubrovnik

When to visit Dubrovnik

April through October is the tourist season in Dubrovnik with the busiest and hottest period in July and August. Many come in the summer to soak up the sun and enjoy refreshing swims from the beaches, with sightseeing optimal in the early morning hours. While the water may be a bit too chilly for a swim in April or early May, this is a good time to avoid the crowds and enjoy comfortably warm temperatures. Mid-September through early October may be the best time of all with summer’s heat making the sea quite pleasant and visitor numbers start to decrease. 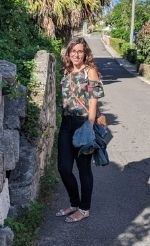 How many days do you need in Dubrovnik?

If you just want to see the highlights of Dubrovnik’s Old City and walk the City Walls, you can do it in a day, but with at least three days you’ll get a much better overview and time to relax in between all the sightseeing. You can take advantage of attractions like the Mount Srd cable car that provides a bird’s-eye view, perhaps take a cooking class in a local’s home or paddle over to Lokrum Island on a kayak tour. Spending a day at the beach is possible as is discovering nearby countries like Montenegro.

When is the best time to avoid the crowds in Old City Dubrovnik?

While you could come in the off-season, November through March, to explore the Old City and capture photos without interruption from countless others, that period is not the best for enjoying other delights like the beaches. Come in May or October and you can check off both. Otherwise, you’ll want to visit early in the morning, before 10 a.m., or later in the day from about 4 p.m. on. During the peak of summer, avoid late morning through early afternoon when temperatures are likely to be sizzling.

What are the essential sites to see in the Old City?

Onofrio’s fountains, completed in the early 15th century, are what you’ll glimpse first after stepping through Pile Gate onto the main street, Stradun. Just to the right, don’t miss the Franciscan Monastery which is home to one of the oldest still operating pharmacies in Europe – it dates back to 1391. Recalling the time when Dubrovnik was Ragusa, and the centre of a republic is the Rector’s Palace. Other highlights that shouldn’t be missed include Bokar Fortress, built to defend the western entrance in the 1460s, the monumental Renaissance-Gothic Sponza Palace, and of course, the City Walls, Dubrovnik’s most iconic site.

Is Dubrovnik worth visiting?

As one of the world’s most magical cities, Dubrovnik isn’t just worth visiting, it’s an essential stop on any Croatian itinerary. Looking as if it came straight from a storybook, the exterior with those massive stone walls is incredibly impressive, viewed while approaching from the sea but the inside is sure to dazzle in this place where history comes to life. You’ll also have the opportunity to soak up the sun and enjoy swims from gorgeous beaches as well as sample mouth-watering Dalmatian fare and fine regional wines.

Why book with Unforgettable Croatia