Five animals you wouldn’t expect to find in Croatia

Discover some of the animals you may not expect to see on your next holiday to Croatia. 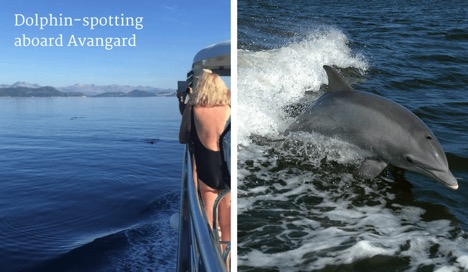 This week a hiker came across a brown bear in the hills above Dubrovnik. Whilst we don’t envy his terrifying encounter, it’s fascinating to learn that these fierce giants still roam the wild. As the name suggests, they have long, brown fur. Large males can weigh up to 480kg and measure up to 2.5m. They have 42 teeth, massive paws, and claws up to 10cm in length. If you’re interested in seeing these giants in their natural habitat, they can be found in Risnjak National Park. A less daredevil approach is to visit Kutervero Bear Sanctuary, where orphaned bears are given a second chance in a safe and caring environment. The centre attracts 20,000 a year and relies heavily on donations.

We were lucky enough to catch a glimpse of the famous Mediterranean bottle-nose dolphins whilst on a Croatia cruise in September of this year. They caused great excitement and the whole ship scurried up to the sun deck to get the best view. These are the only marine mammals still living in the Adriatic Sea.

As with all types of dolphin, these are ever-playful and interactive which shows their high levels of intelligence. In the 1960s these charming animals were perceived as pests which sadly meant that the population was reduced by 50%. Now, with more awareness and appreciation, dolphin conservations are being set up along Croatia’s coast.

The lineage of this noble breed of horse can be traced back to 1562 when the Hasburg nobility needed a strong and agile steed for military use. Riding schools were also fashionable at the time. Lipizzaners were trained in the famous school in Vienna and later, in stud farms across Europe.

The Stud Farm in Đakovo has bred and trained these stunning animals since the beginning of the 19th century. The facility has the largest indoor riding school in Croatia. Visitors can watch the masters at work in jumping and dressage competitions, and riding packages for the uninitiated are also available.

Dalmatian pelicans have giant wingspans of up to 8ft. They feed entirely on fish, and due to reclamation of land in recent decades, their feeding area has been much reduced, causing their near extinction. There have been sparse sightings of these magnificent birds at the mouth of the Neretva River in Croatia.

Admittedly not a looker, this squirmy amphibian is exclusively found in caves in Europe. It has three toes on its front legs and two on its rear legs. It has undeveloped eyes but acute scent and hearing and measures around 30cm in length.

In medieval times, people local to habitats of olms believed them to be cave dragons’ offspring. Croatia’s caves are well worth a visit. Some of our favourites are the Blue Cave on the east side of the island of Biševo and Špilja Vrelo in Gorski Kotar which is often illuminated by thousands of glow worms.