Talk to the Expert 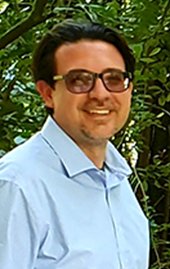 Having grown up on the Island of Sicily, I was introduced to Croatia over a decade ago and I immediately fell in love. Like Sicily its adorned with spectacular coastline, charming Old Towns and warm and welcoming locals at every turn.

Discover the best of Istria on this remarkable 2-centre holiday staying in 4 and 5-star hotels in both delightful and historic towns – Rovinj and Pula. These beautiful and iconic towns on the Istrian Peninsula are among Croatia’s most treasured jewels – with a pretty coast and glittering blue waters, steeped in history. Inland, there are a diverse collection of charming towns – from lush interior wilds dotted with hilltop villages and quaint converted farmhouse hotels. It is a rural hinterland of undulating vineyards and olive groves, guarded by medieval fortified hill towns such as Motovun and Groznjan. 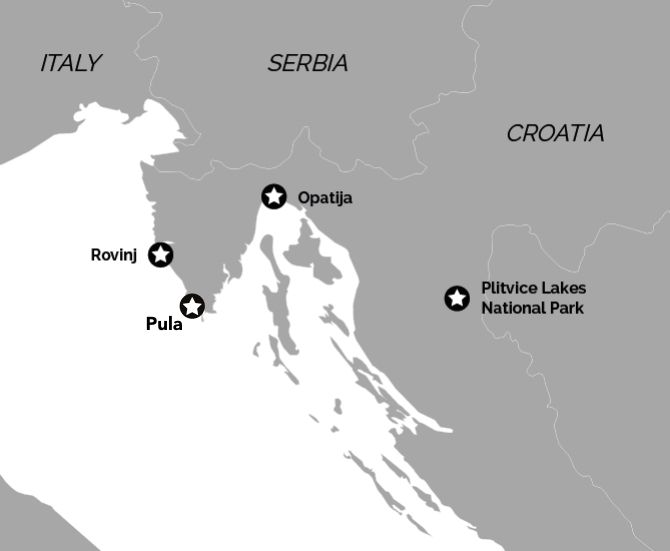 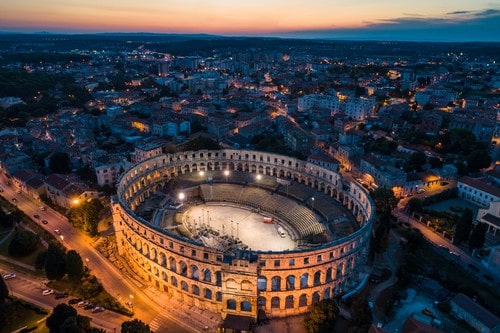 You will be met on arrival at Pula Airport and your driver will transfer you to the charming medieval fishing port of Rovinj which competes with Dubrovnik as Croatia’s most photographed destination. You will check in to the 5-star Hotel Lone which is just a 10 minute walk to the centre of the town. Rovinj was originally built on an island but has since been connected to the mainland. Take a stroll through the postcard-pretty cobbled streets and admire the colourful facades of the local buildings. Visit the hilltop church of St Euphemia to view the lofty steeple that dominates the skyline, and the pebble beaches of Lone Bay. Enjoy a traditional local meal whilst admiring the exquisite views. This area is irresistibly photogenic. 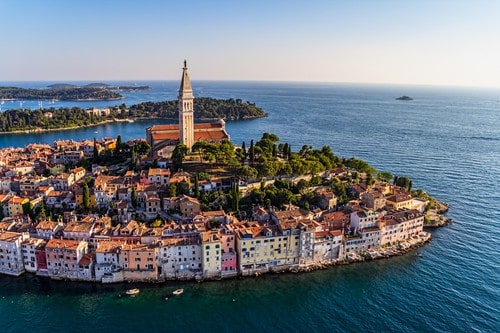 Get lost in the old town with the colourful, medieval streets bursting with Venetian houses, squeezed one to another and right by the water’s edge. Explore the large number of excellent art galleries that are situated along the steep and narrow pedestrian streets and visit the vibrant harbour with a large collection of small pleasure and fishing boats. The beauty of Rovinj is inspiring and full of romance and intrigue. Relax at the spa and fine swimming pool at the Hotel Lone or take a swim at one of the nearby beaches and coves.You could even try your hand at scuba diving where there are some incredible shipwrecks under the sea. Tucked along the narrow passages and alleyways there are many interesting shops, cafes, bars and restaurants that are well worth exploring. 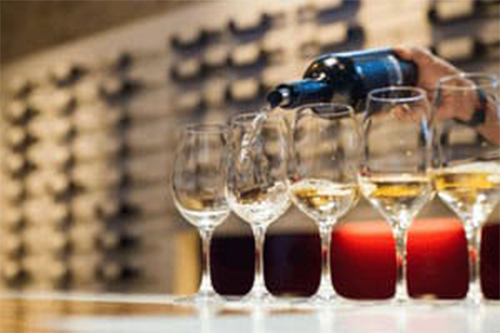 A private tour of the Istria region through the dreamy countryside dotted with traditional villages that will overwhelm you with their beauty. You will visit the Kozlovic Winery which is hidden in a secret valley and has been founded on the family tradition of four generations of the Kozlovic family. There will be an inspiring guided tour of the wine cellar with a full explanation of the wine production process, as well as a tasting of the delicious Istrian wines. You will also experience the charming hilltop medieval fortified villages of Motovun and Groznjan with its vibrant ambience and maze of cobbled streets full local of arts and crafts. 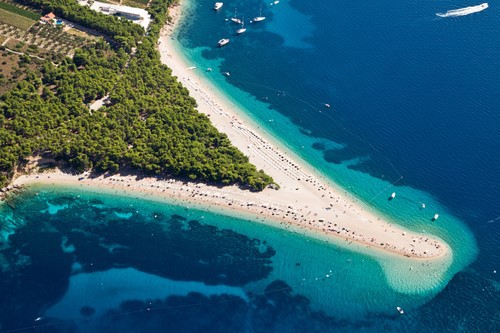 Just a 20 minute drive from the hotel, will take you to the fascinating, beautiful and ancient Lim Bay area. It is a 35 km protected landscape of spectacular slopes that are covered in different forms of evergreen shrubs and oak. The water in the bay is sweet and suitable for the growth of plant and animal life, including fish and oysters, that can be sampled at one of the nearby restaurants on the coast of the bay. Alternatively, enjoy a relaxing day at the hotel and utilise the spa facilities and head down to the scenic beach and explore the Golden Cape Natural Park. 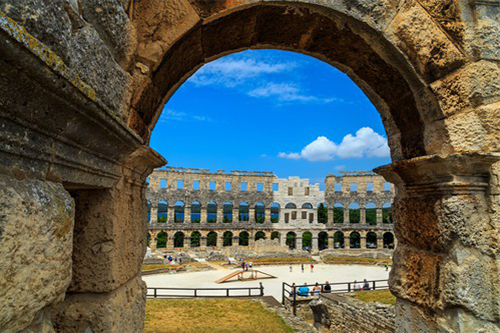 You will be collected for your private transfer to the Boutique Hotel Oasi in Pula. This is a charming boutique hotel set in a beautiful location, just 200 metres from the beach with an attractive pool area and spa. Pula, a stunning Riviera town is on the tip of Croatia’s Istrian Peninsula and boasts a protected harbour, beach-lined coast and famous Roman ruins. Romans put the city firmly on the map when they arrived in 177 BC, and constructed the incredible amphitheatre whose beachside remains are the city’s most revered attraction. Built to hold 20,000 spectators and is still used today as an outdoor cinema and to host events as diverse as ice hockey, foodie markets and Tom Jones concerts.Settled in the prehistoric era and valued for its strategic location. 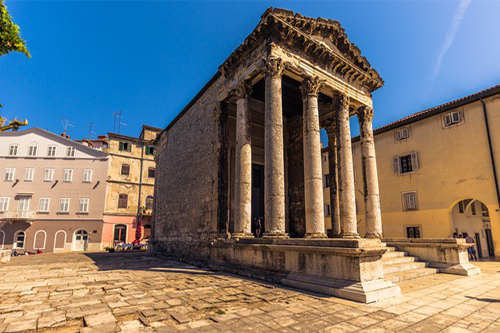 Head into the historic old town that has been occupied, destroyed and rebuilt numerous times. The Romans, Ostrogoths and Venetians, as well as the Allied Forces in World War II, have each administered the city. As well as the Amphitheatre, the Temple of Augustus, in the city’s old Forum, is impressive too. Bombed during the Second World War, it was rebuilt and today houses the Pula Museum of Archaeology. Other Roman relics include the Arch of Sergius and an impressive mosaic floor, discovered by chance after the buildings near Chapel of St. Maria Formosa were destroyed during WWII. Istria was part of Italy until 1947, and the influence of Italian cuisine is still apparent. It is also a major fishing port, so the seafood so head to the restaurants dotted along the Limski Canal for the freshest oysters and mussels. 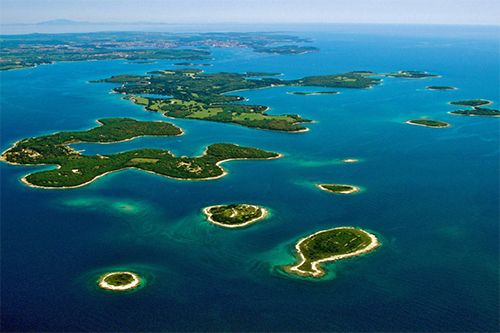 Just to the north of the city you’ll find Brijuni National Park, a collection of densely wooded islands which is a hidden paradise. It’s not just about the sparkling seas and white beaches – you’ll also find Roman villas, a Knights Templar church and dinosaur footprints from the Cretaceous Period. Take a guided tour around the island or explore this area of outstanding natural beauty at your own pace. Alternatively, spend your last day exploring the delights of Pula or relaxing on the beach. 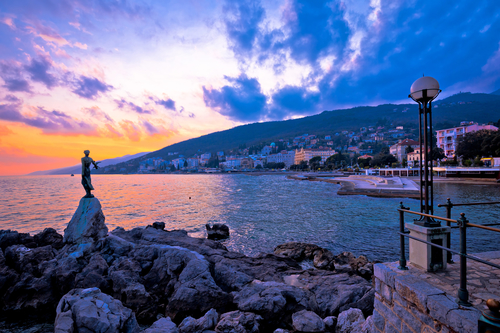 Time to bid farewell to the friendly hotel staff and others that you may have met during your stay. You will be transferred to Pula airport for your flight home after a memorable twin-centre Rovinj and Pula holiday, where you will have discovered the best of Istria.

Let’s get started making this itinerary yours.